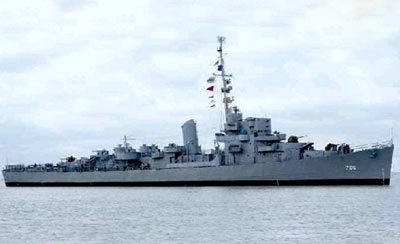 Albany NY - A portion of an upcoming WWII movie was filmed on the USS Slater DE 766 Former Battleship, docked in Albany. Filming for 'Orion in Midsummer' began aboard the USS Slater on August 17 and continued for nine days through August 29, 2008.

The ship was closed to the public during filming.

Tokyo based production company Destiny, Inc. filmed the movie in conjunction with Marcom Visual Creation, Inc. of NYC. The story is set in the Pacific Ocean near the end of the second World War. The storyline encompasses the final days of the war and the struggle between Japanse submarines and American destroyers. The USS Slater was chosen for the role because the ship remains the last Destroyer Escort afloat in the US. Other portions of the movie was filmed in Japan and other locations.

Production coordinators conducted a cast screening here in Albany on August 9 at the Holiday Inn Express to discover young males with acting talent. Hoping to discover actors that fit the mold of American period sailors, the company sought young males who met strict requirements. In order to fit the role, actors had to be white, between the ages of 18 and 30, no taller than 6'2, weighing between 145 and 190 pounds with a waist size of 32 - 34 inches and shirt size 13 - 15 1/2 inches.

The movie, entitled 'Orion in Midsummer' will be released in Japan in Spring 2009. The film is expected to be available for DVD purchase in the United States following its release abroad.

The USS Slater reopened to the public in time for Labor Day weekend.