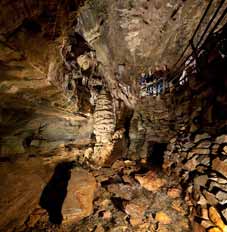 ALBANY NY - Television cooking sensation Rachael Ray has begun a new segment of her show called "Rachael's Vacations : Outdoor Adventures".In these episodes, Ray will be traveling internationally to sample flavors of far away. But among these exotic destinations, this Friday, July 2, 2010 on the Food Netword at 11pm Eastern Time will feature a well-known close-to-home location: Howe Caverns.

A native of the Capital Region herself, born in Glens Falls, NY, it's no big surprise that Ray wants to pay a visit to her roots. After exploring the underground, Ray will sample the Cave House Chowder, Tanzella Panini, and Breakfast Pizza.Then she will enter the sweet shop for some Homemade Peanut Butter Explosion Fudge.

This is the third time Howe Caverns has been on TV in the past year. In March, parts of the area were filmed as part of The History Channel's "The Real Face of Jesus?" In 2009, their cave-themed motorcycle was one of the featured attractions of an episode of American Choppers on the Learning Channel.

The latest feature, Rachael Ray's episode, is scheduled to air at 11pm Eastern Time on the Food Network on July 2, 2010 .

Howe Caverns is located between Albany and Cooperstown. It is open daily, except for Thanksgiving and Christmas Day. From April through October, the hours of operation are 9am-6pm. In November and through March, the hours change to 9am-5pm. For more info, call 518-296-8900.

Don't miss the episode! Tune in to the Food Network on July 2, 2010 at 11pm Eastern Time - and then be sure to go and see what all the fuss is about at Howe Caverns near Albany, NY!

Visit Our Guide To Albany Events »