We urge everyone to contact individual businesses to confirm their hours of operation before visiting, while we flatten the curve through social distancing.
Home / Things To Do / Sherlock Holmes Review 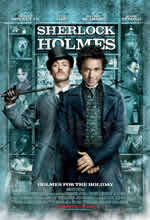 Applause for Robert Downey Jr., proud winner of a Golden Globe award for his role in Sherlock Holmes. The film itself is an exciting, engaging story directed by Guy Ritchie, the writer and director of Snatch.

The famous title character in Sherlock Holmes evolves out of the thick, antiquated novels of Sir Arthur Conan Doyle and into a kind of intellectual action figure enjoyable by modern audiences.

Newcomers to the Holmes stories will find the film stimulating, with both an intricate plot and creative, fast-paced action sequences. Devotees to the novels will like the mysterious surprise character, the film's dedication to the classic Holmsian story arc, and a plunge into the workings of Sherlock's brilliant mind.

Whatever your (in)experience with the fictional detective and his stories, Sherlock Holmes is an exhilarating film experience - worth the curiosity over Robert Downey Jr's award. Also starring Jude Law (as the devoted but irked sidekick, Watson) and Rachel McAdams (Holmes' beautiful but conniving love interest, Irene Adler), the film is rated PG-13 and runs for two hours.