We urge everyone to contact individual businesses to confirm their hours of operation before visiting, while we flatten the curve through social distancing.
Home / Winter / Olympic Bobsledder 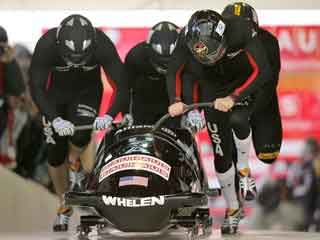 Root for the home team! The bobsled team, that is. John Napier, an Albany local, will head to Vancouver with the U.S. Olympic team with a chance to drive his bobsled team to being the best in the world. Not only is Napier the youngest pilot in the 2010 Winter Olympics, he is also the youngest American to drive a bobsled since 1932.

Napier, a graduate of Schenectady High School, has always dreamed about being an Olympian. He has lived and breathed the sport since he was 2 weeks old, when his father would take him up to the Olympic Track in Lake Placid. He began bobsledding at the age of 8 in events organized by his father. Bill Napier, who passed away from cancer in 2005, was a bobsledder in the 1960's and 70's, was his son's first coach and was just inducted into the Bobsledding Hall of Fame - his mother accepted the award for her husband. His father is a huge inspiration for him and John hopes to follow in his footsteps. 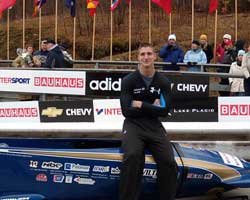 Napier has dedicated himself to getting in the best physical shape possible through a rigorous lifting and nutritional program at the Olympic Training Center in Lake Placid and hopefully all his hard work will pay off. At 6-3 and 205 lbs. he is now a dominant force. His mother, and one of his biggest fans, was so confident in her son's talent that she bought her tickets to the Winter Olympics back in the summer of 2008.

Napier got his shot on the Olympic team in December of 2009 when two-time Olympian Todd Hayes suffered a brain injury and was forced to retire. Napier realized he could fill this seat and proved it by finishing third in a World Cup race in Germany, and last weekend at the conclusion of the World Cup, ranked fourth in the 4-man and ninth in the 2-man.

Napier's passion for bobsledding is really what drove him to where he is today. Not only is he representing the U.S. in Vancouver on the Olympic Team, he is also a member of the U.S. Army. He is supported by the Army's World Class Athlete Program, and has inquired about serving time in Afghanistan after the Olympics. Until then, he is focused on his dream of taking home an Olympic medal.

The 2010 Winter Olympics in Vancouver begin February 12, 2010. Also watch for Saratoga local Olympian, Trevor Marsicano, as he competes for the U.S. in speedskating. Also, meet the troop of Olympic athletes that come from Lake Placid.

Napier will compete in the following events: