Coming to Albany for a Business Trip? Here's 7 Things Not to Miss!

Albany, New York is an ideal, centralized location to host a meeting, conference, or a business trip outing. If you happen to be in town on business, you might be wondering what sights to see before you head back home. We've rounded up seven can't-miss business trip attractions for when you're in Albany!

Whether you're looking for a fun outing to enjoy with coworkers during downtime, or you'd like to escape on your own for a bit, you simply can't leave Albany without checking these attractions out. 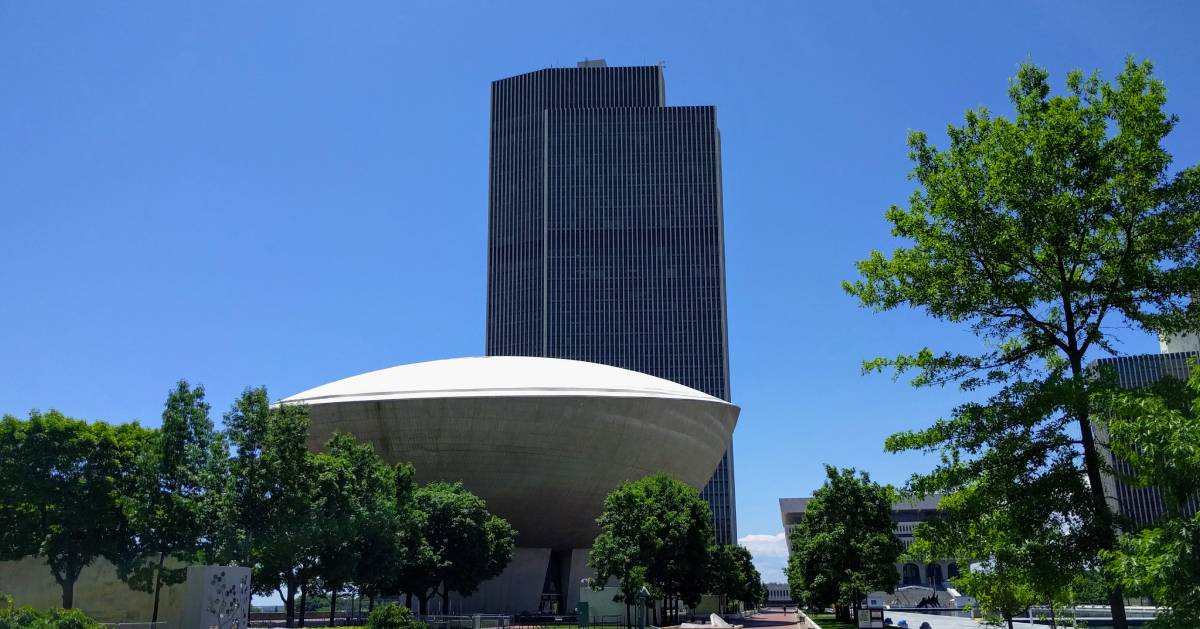 The Egg is more than just a prominent spot on the Albany skyline, although it's certainly known for its unique, architectural beauty. It's also one of the primary performing arts venues in the Capital Region, with two separate theaters: The Lewis A. Swyer Theatre and the Kitty Carlisle Hart Theatre, or as it's simply known, the Hart Theatre. At The Egg, you can see live music performances, comedy shows, and more performing arts.

Check out a show with some colleagues or clients, or, you could simply take a walk around the Empire State Plaza where The Egg is housed. There is metered parking during the day, which is free in the evenings and weekends. There are also two parking lots and more than one parking garage close by. The plaza has pools, fountains, and much more to enjoy.

See upcoming performances at The Egg >> 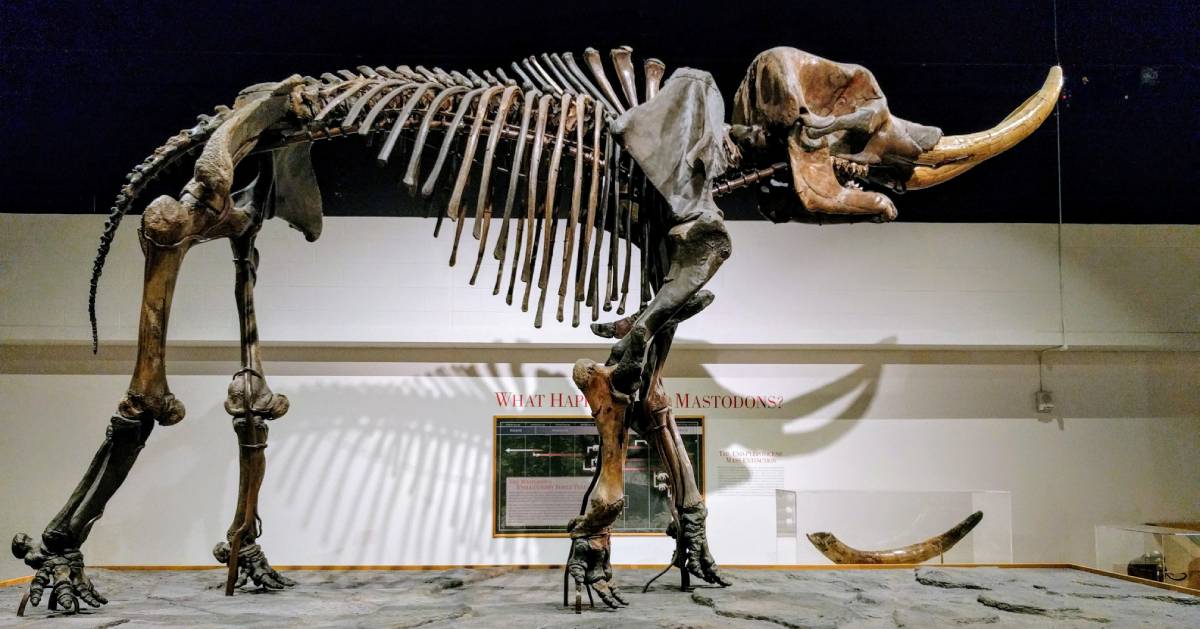 Also right in the Empire State Plaza, the New York State Museum is a hub of fascinating history and beautiful art. And, it's free! This is a perfect venue to explore with coworkers while on a business trip, as you learn all about this compelling state. Need a little breathing room from colleagues during your downtime? Feel free to wander off from the group and explore the museum on your own - you can always meet back up for a meal or drinks later!

See exhibits on Adirondack wilderness, birds of New York State, animals from the Ice Ages, Harlem in the 1920s, fire trucks from throughout the years, minerals of New York State, and much more. In 2002, the New York State Museum added the country's first World Trade Center exhibition, including artifacts documenting the September 11th attack - this touching exhibition is definitely a can't-miss attraction while in Albany. 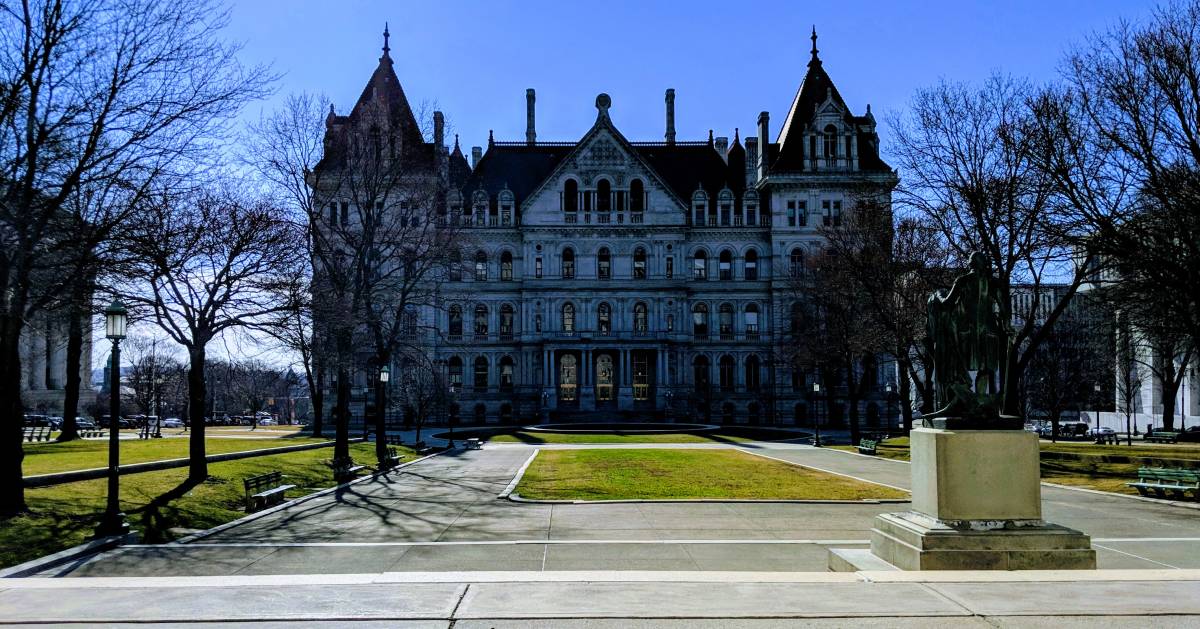 You must make a stop at the state's Capitol while in Albany! Free guided tours are available from Monday through Friday, and they last between 45 and 60 minutes. So, this could be a perfect outing if you have a larger group in town for a meeting and you're looking for something everyone can do together. You'll just need to make a reservation ahead of time if there will be 10 or more people.

The Capitol has served as the seat of government in New York State since the 1880s and is considered to be an architectural splendor. It was constructed by hand of solid masonry and took 32 years to complete. 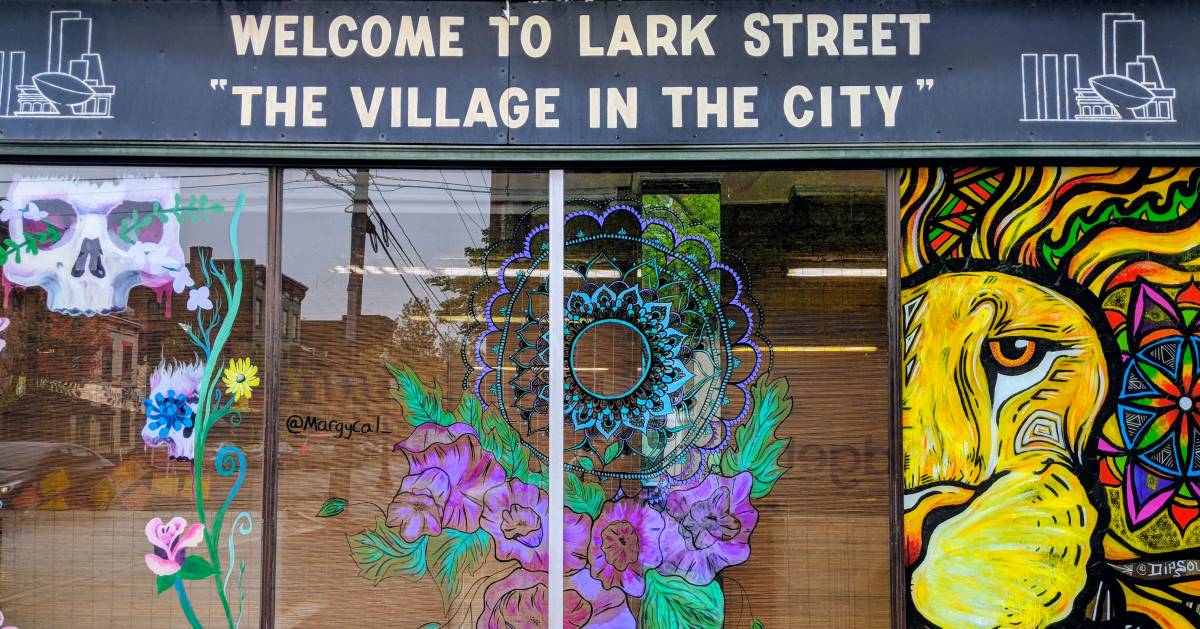 When on your business trip you'll likely need to unwind after a long day of meetings, and there is no better place to do this than on Lark Street. The Lark Street neighborhood is one of Albany's main hotspots for incredibly diverse restaurants (think Thai, Mexican, Italian - there's even a vegan delicatessen) and a thriving nightlife scene.

Lark Street isn't just for nighttime, though. If you're able to get away from your conference or meeting during the day, have coffee with a coworker at one of the charming cafes like Stacks Espresso Bar or the Daily Grind, and check out the quaint shops that line the street. If you're looking to pick up a unique gift for someone back home for when you return from your trip, Lark Street might be the place to find a little something special. 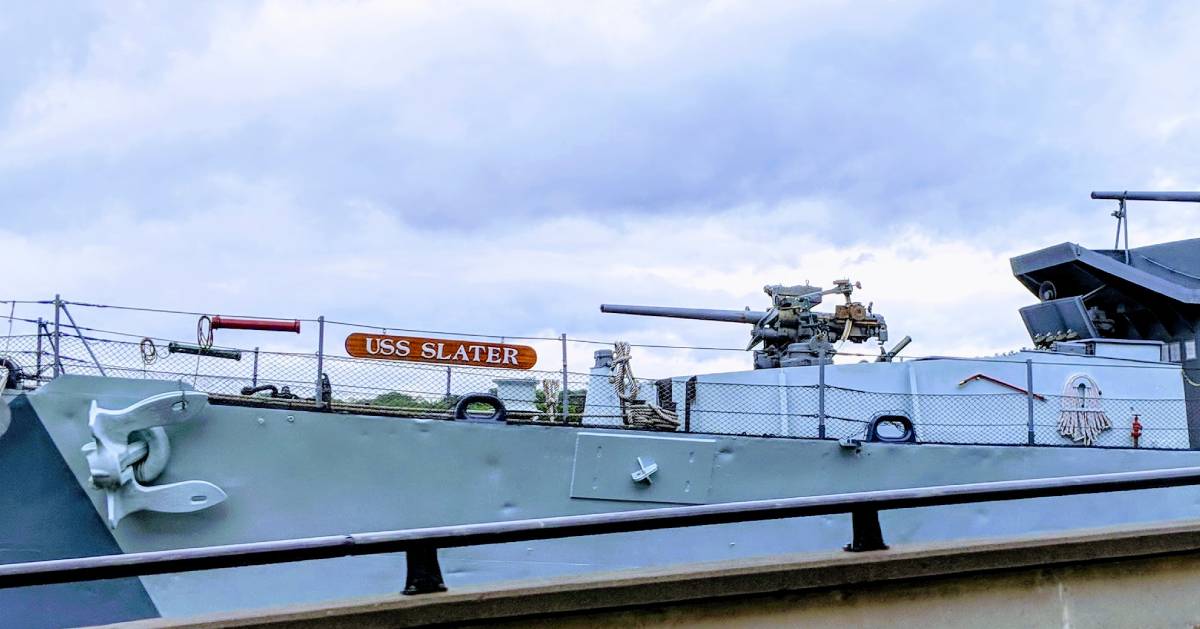 Got any military or history buffs traveling with you in Albany? Make sure to add the USS Slater to your list! The USS Slater is the only destroyer escort still afloat in this country. The entire ship is moored right in the Hudson River, and has been transformed into a museum that is open to the public for tours on Wednesdays through Sundays, April through November.

Tours last at least 90 minutes and there are no restrooms on board, so if you're traveling with a large group they recommend making a stop beforehand. The typical tours offered are the deck-by-deck tours, where you can see, hear, smell, and touch objects used by the young men and teenagers who lived and fought aboard this ship during World War II. However, if someone in your group has a special concern such as a mobility issue, they will work with you to organize a special tour by appointment. 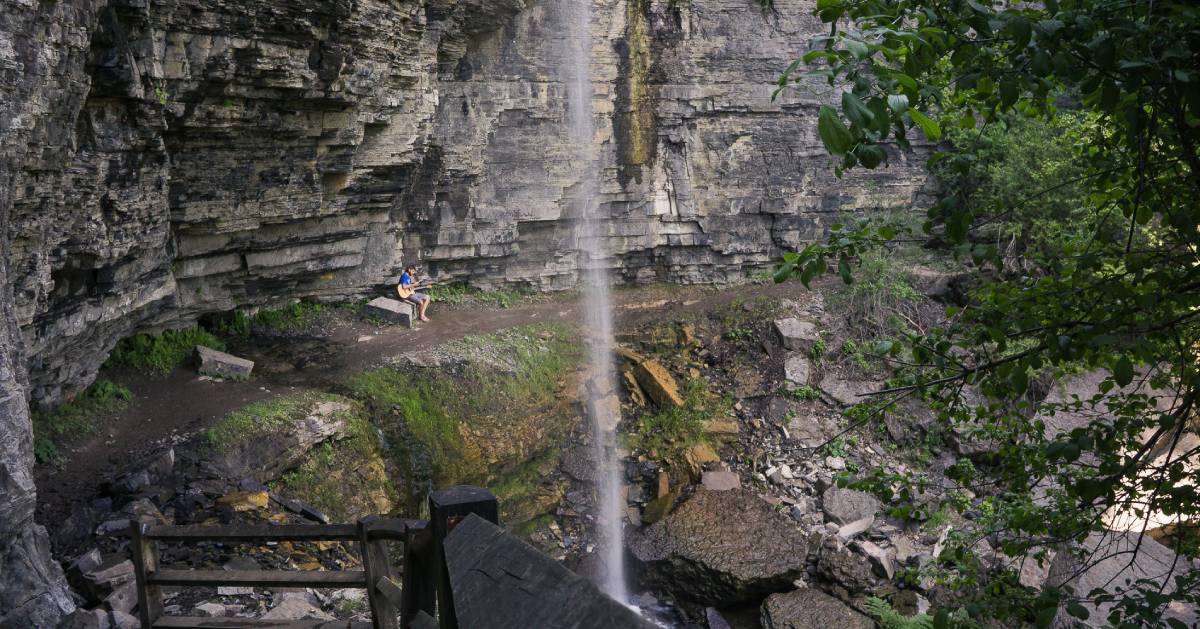 Need a little fresh air on your business trip? Feeling a little cooped up in conference rooms? Grab a few colleagues and head to Thacher State Park, one of the most popular parks in the Albany area. Hiking trails are available year-round.

Not up for a hike but would like to get outside? Picnic areas, grills, and pavilions are available as well. You can feel free to skip the hike and have lunch with your coworkers in a beautiful nature setting. 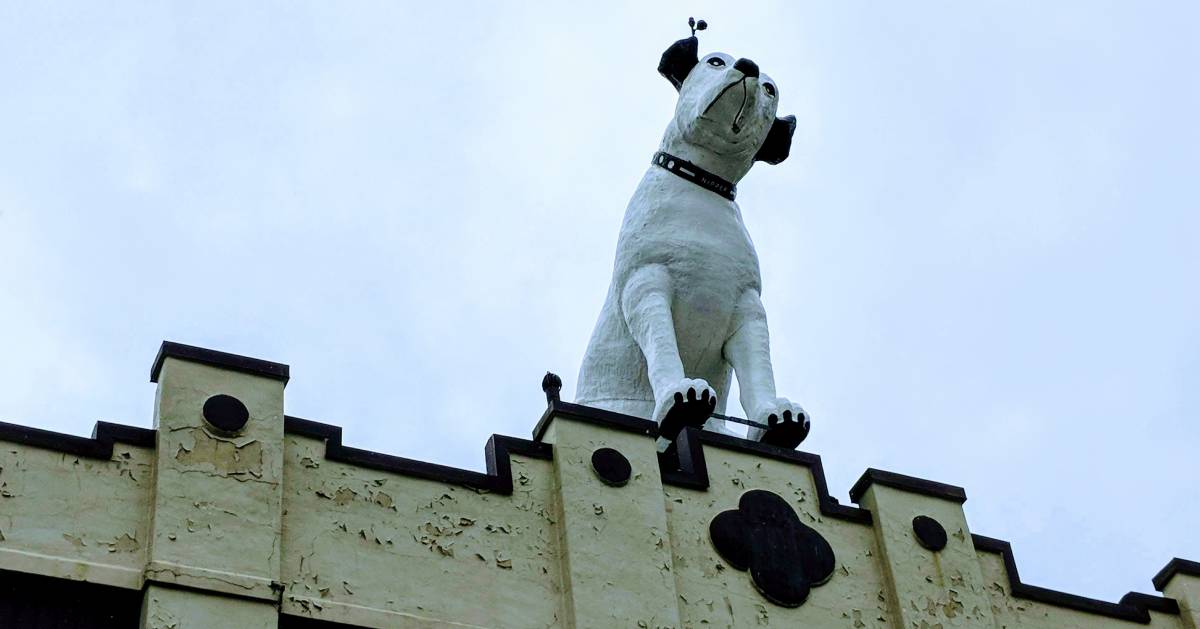 If you didn't know now you do: Albany, New York is home to the world's largest man-made dog, Nipper. Nipper has been something of a mascot for Albany for many years, and it looks over the warehouse district of Albany on Broadway. Make sure to drive by this unique sight while in town!

There is a fun story behind the great dog: Nipper was constructed in 1958 following the renovation of the warehouse it sits upon and is based on an actual dog. Nipper the real dog was owned by an Englishman named Francis Barraud, who once caught his dog listening intently to a windup cylinder phonograph. He painted a picture of this moment and ended up selling the rights to the Gramaphone Company. Since then, it has become a widely known trademark used by companies like Radio Corporation of America (RCA) who used to own the warehouse Nipper is placed on.

Nipper is 28 feet tall and weighs four tons. He rests on the warehouse building at 991 Broadway, so if you're renting a car on your business trip that's the address to type into the GPS. Enjoy a laugh with your coworkers as you take pictures of Albany's top dog!