COLONIE NY - It seems to be 'roundabout mania' lately in the Capital District, and one more roundabout project has been approved for the east side of the Albany International Airport. 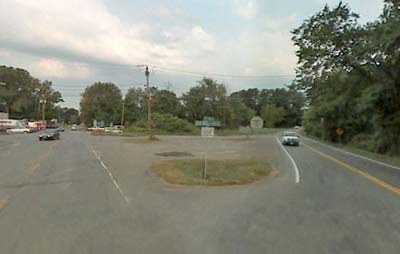 The new Albany Airport roundabout will replace the intersection where Old Niskayuna Road, Old Wolf Road and Watervliet Shaker Road meet, near the economy parking lot "E" at the airport.

Growing traffic at this awkward, triangular intersection has been the cause of much confusion, congestion and several accidents throughout the years. The intersection is also in dire need of repair to remedy broken pavement and drainage problems.

Roundabouts have become the leading trend for problem intersections in the Capital District. The Town of Malta has welcomed five roundabouts over the past three years and already has plans for two more. The Glens Falls roundabout has greatly improved traffic flow and safety for the five-street intersection near the Glens Falls Civic Center. Plans are also underway to add a roundabout on Church Street in Saratoga Springs. The entire Capital Region is seeing the benefits of roundabout intersections, and now the Town of Colonie is jumping on board.

The Albany Airport roundabout is being funded in part by the Albany County Airport Authority Board, who approved the project in early May 2008. The board will pay 20 percent of the $1.1 million estimated cost of the project, or about $220,000.

The state Department of Transportation will design and engineer the roundabout construction, and the state has also agreed to cover 30 percent of construction costs.

The remaining half of the project cost will be split between the town of Colonie and Albany County, each paying 25 percent.

Once the roundabout is finished, Albany Airport officials are likely to discuss plans for a direct route between the new roundabout intersection and parking lot "E" at the airport.