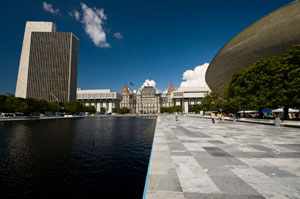 Albany NY | September 2010 -- The Daily Beast puts the greater Albany NY region at the front of the class, listing the Albany-Schenectady-Troy triangle as the thirteenth brainiest metro in the country out of the top twenty!

The criteria was based on a few pivotal findings, all equally weighed: the number of adults aged 25 or over with a Ph.D., master's or professional degree, the share of computer scientists and mathematicians who are employed in terms of total employment and scientists (physical, biological, social) as a share of total employment.

It's not unlucky thirteen for Albany, sitting with some of the most distinguished regions in the US known for their intellectual capacity and technological output, among many other factors. Places like Washington DC, the greater Boston area, and the greater Trenton area (including Princeton University) are all bastions of the intellectual set, towns that bring to mind great thinkers and creators, the movers and shakers.

Boulder, Colorado ranked first with nearly a quarter of the inhabitants receiving a graduate or professional degree. Not only do they have the University of Colorado at Boulder, but the city was also recently named as the nation's best place for startup companies - harnessing not just the brilliant, but the creative too. Not bad company to be in.

Importantly, to this list and to Albany all of these factors point towards a more resilient local economy in this current economic situation; more proof that the smarts will win out.