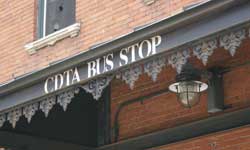 ALBANY NY - The Capital District Transportation Authority (CDTA) received $2 million in bus funding from the federal government in May 2008.

Albany CDTA plans to go hybrid, putting this federal money toward buying a fleet of 20 new hybrid buses. These diesel-electric powered buses will be an upgrade from the current CDTA vehicles and are expected to cost over $10 million.

Will hydrogen-powered buses be next? CDTA is part of a pilot project called "HyIMPACT" (along with Albany International Airport) to test whether the efficiency of hydrogen-powered vehicles proves successful enough to run a fleet of these alternative fueled buses. CDTA will test two Toyota Prius sedans, modified to run on hydrogen, starting this summer. The $1.2 million project will be funded by the New York State Energy Research & Development Authority.