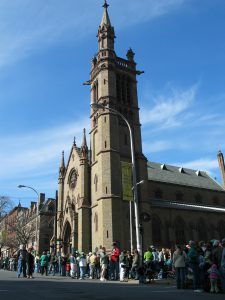 Get ready to hear a lot of bells on Sunday.

This weekend, on April 26, Albany City Hall and churches throughout the City will mark the 150th anniversary of President Abraham Lincoln’s funeral procession in Albany, NY.

Beginning at Noon, the venues will ring their bells for one minute and 50 seconds.

On April 14, 1865, President Lincoln was assassinated in Washington D.C.; eleven days later, shortly before 11:00 PM, his body arrived in East Albany (now the City of Rensselaer). On April 26, 2015 at 1:15 AM, the New York State Capitol opened its doors to the public for mourners to pay their final respects. At noon that day, Lincoln’s body was removed from the building to the sound of church bells from all corners of the city.

To commemorate the occasion, bells from throughout Albany will ring out at the exact moment they did 150 years ago. Participating places include: