Travels Through History: Explore These Unique Museums and Attractions In & Near Albany

History is alive in the Albany area, and one of the best ways to experience it is at a museum or attraction. There are a wide variety of places within 60 minutes of Albany where you can learn about everything from historical figures to military history, natural history, and the development of local communities. From the New York State Museum to Saratoga National Historical Park, begin your travels through history in and near Albany.

Broaden Your Knowledge as You Learn About the Past in Albany 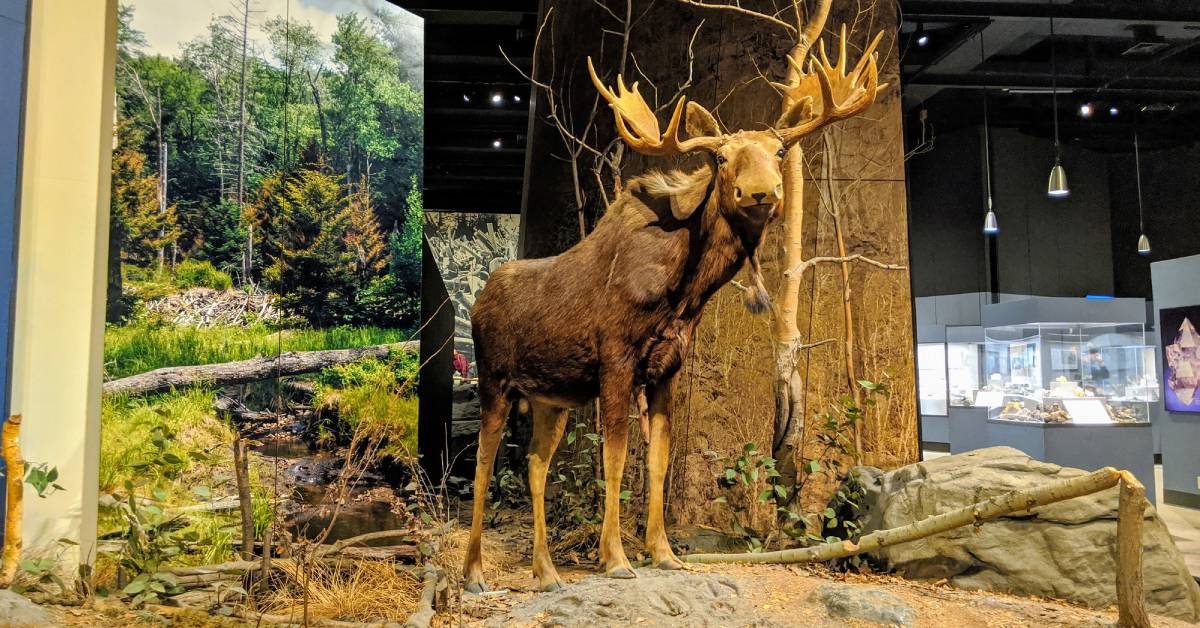 Established in 1836, the New York State Museum is the oldest and largest state museum in the United States, and its exhibitions focus on New York's natural, cultural, and human history. You can find the museum at the southern end of Albany's Empire State Plaza, and admission to the building and its historic carousel is free. The New York State Museum is home to over 100,000 square feet of exhibition space, and there are ongoing exhibits about "Native Peoples of New York," "Adirondack Wilderness," historic fire engines, American stoneware, the World Trade Center, and more. 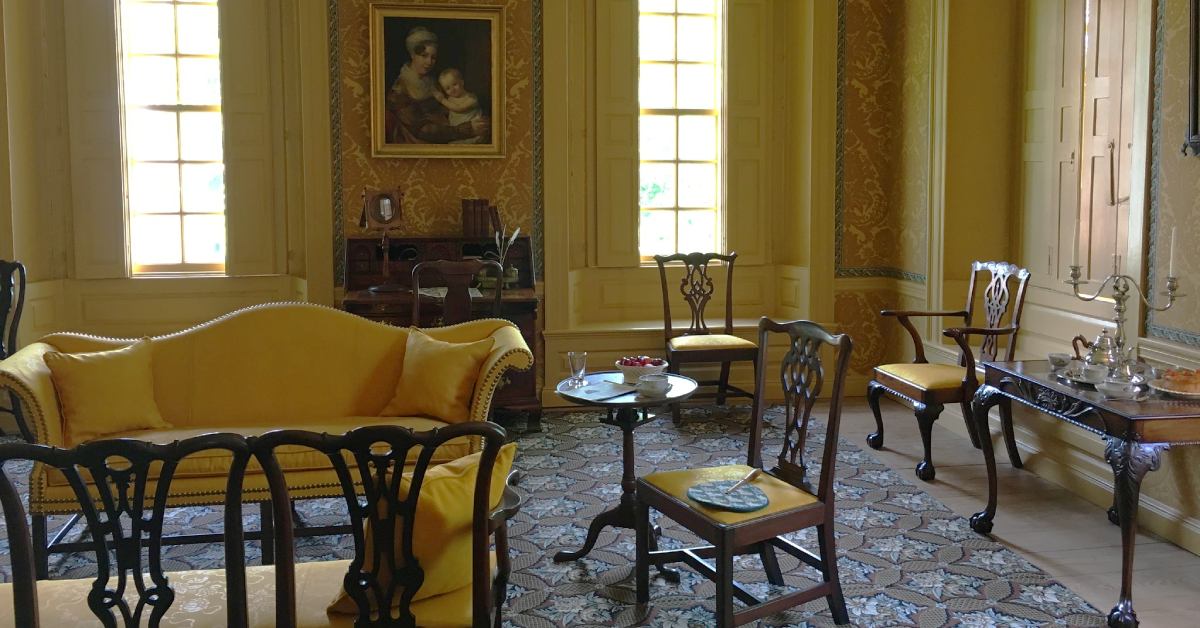 The Schuyler Mansion State Historic Site in Albany is the former home of renowned Revolutionary War general, U.S. Senator, and business entrepreneur Philip Schuyler and his family. He and his wife raised eight children at this mansion, which features a Georgian style of architecture and was constructed from 1761 to 1765. The Schuyler family occupied the home from 1763 to 1804, and the wedding between Elizabeth Schuyler and Alexander Hamilton was held at the house in 1780. 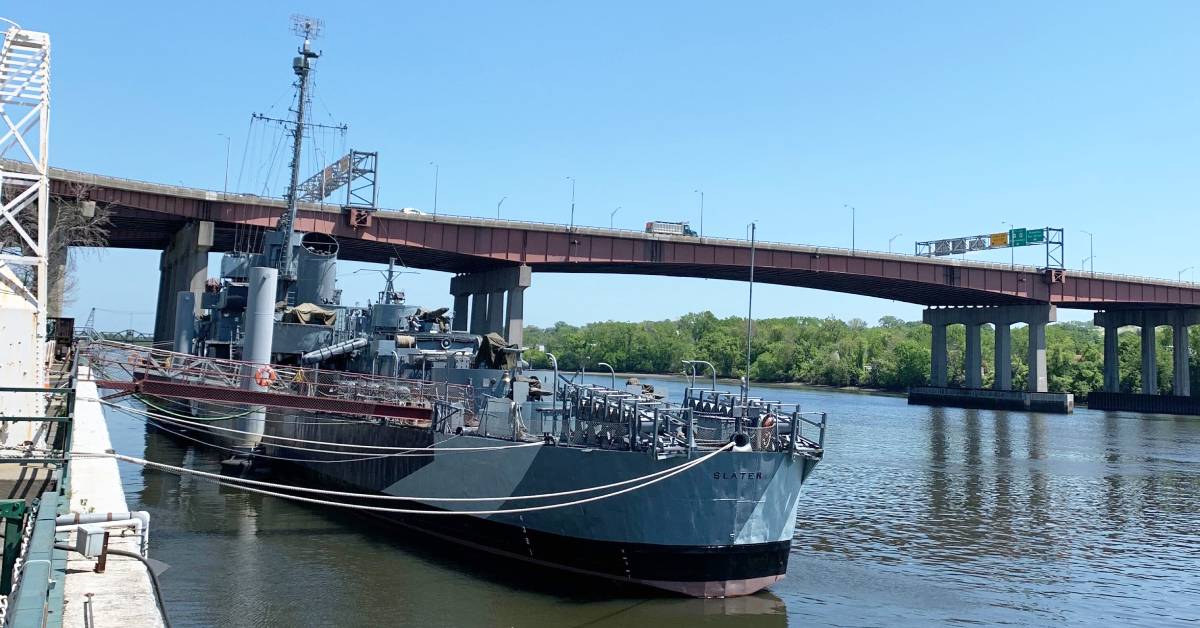 The USS Slater is a Cannon-class destroyer escort that served the U.S. Army during World War II. Since then, it has undergone extensive restorations and now operates as a museum ship on the Hudson River in Albany. The ship is recognized as the last World War II-era destroyer escort still afloat in America, and it's open seasonally for tours from April - November. During your guided tour, you'll have a chance to walk the decks like sailors, aim the weapons, and hear incredible stories about the USS Slater's history.

Plan a Trip to Historic Homes, Buildings & More Just Outside of Albany 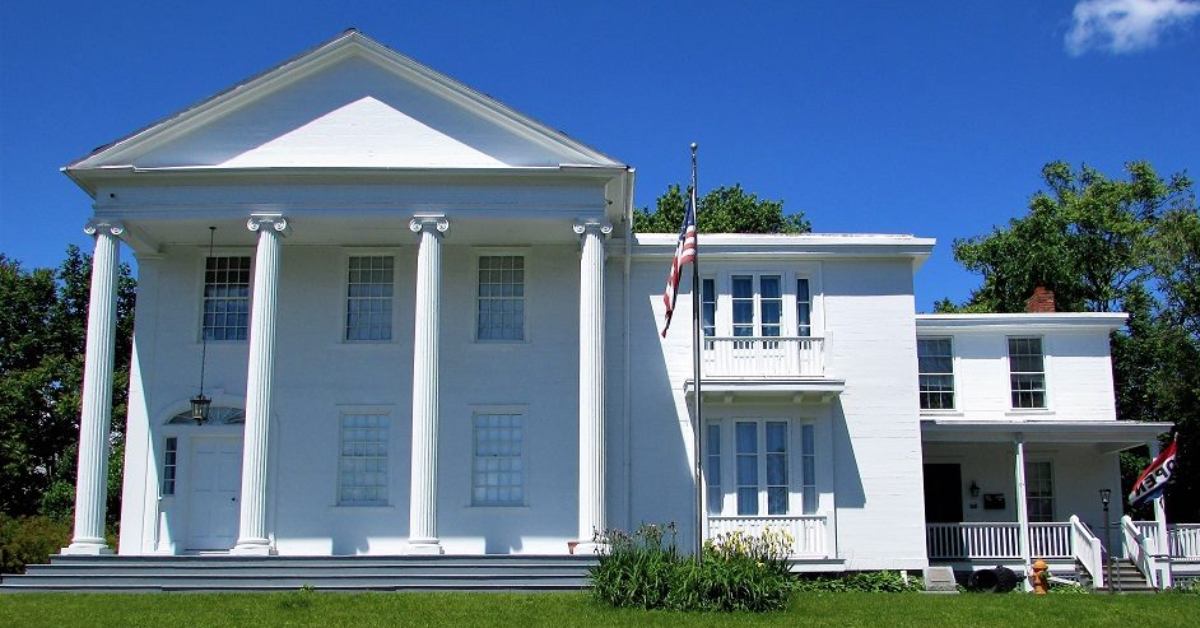 Photo provided by the Waterford Historical Museum and Cultural Center

The Waterford Historical Museum and Cultural Center is located in the 1830 Hugh White Homestead, a Greek Revival mansion that's about 14 minutes north of Albany. As part of southern Saratoga County, the museum features a permanent illustrated exhibition about the Town of Waterford and temporary exhibits about the local area, including ones on canal history, industrial history, architectural history, and more.

The Bidwell House Museum: Get an Inside Look at What Life Was Like in the Berkshires 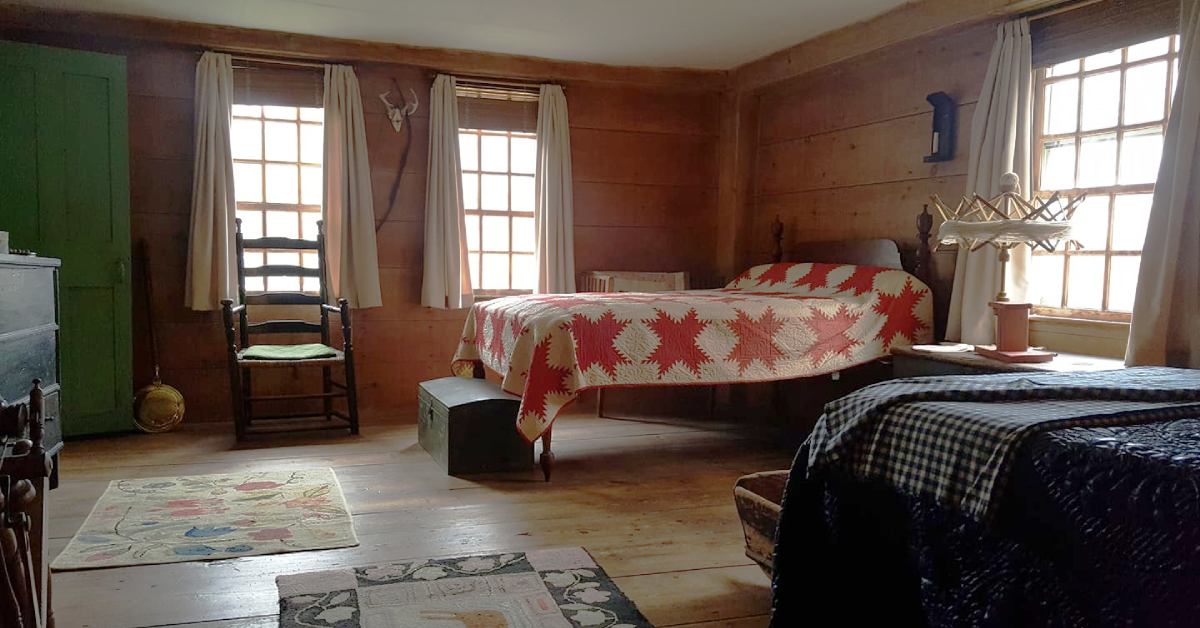 Nestled in the Berkshire hills of Western Massachusetts, the Bidwell House Museum is a historic 1760s homestead that's been authentically restored and furnished with 18th and early 19th century decorative arts and antiques. Rev. Adonijah Bidwell, the first minister of Township No. 1, built the house around 1760, and it stayed with the Bidwell family for three generations before changing ownership.

In 1990, the Bidwell House opened as a museum that tells the story of the early settlement of the Berkshires. Guided house tours are held for a small fee, and the property's grounds and garden are open to the public year round for hiking, snowshoeing, or cross-country skiing (no admission charge). The museum is located just under an hour from Albany. 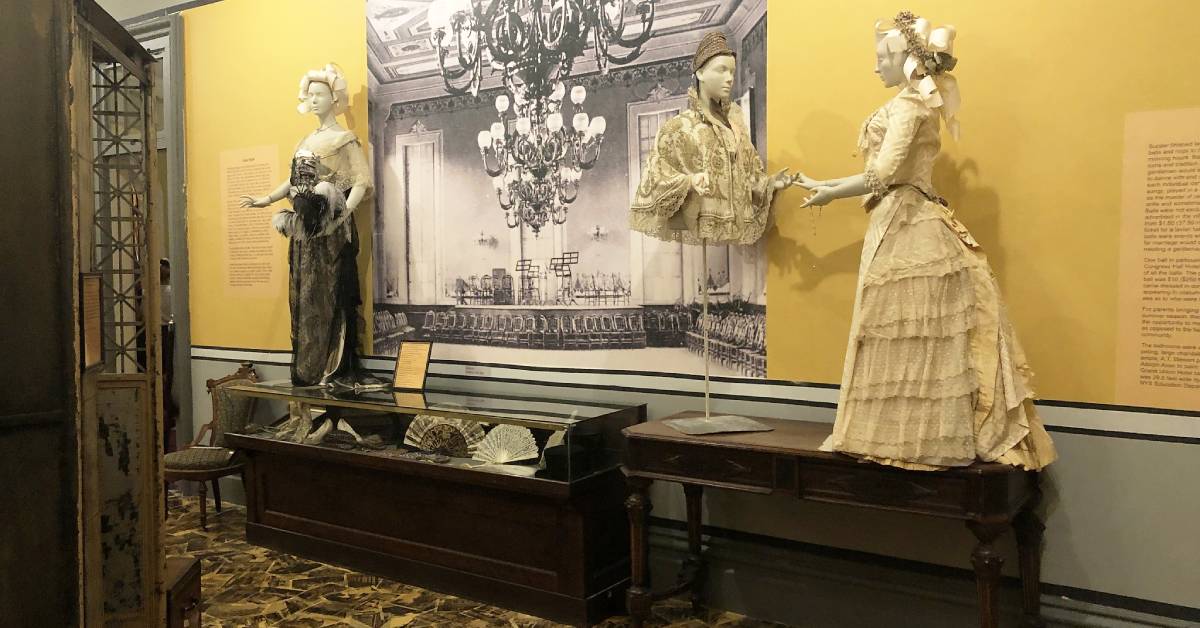 The 36-minute drive from Albany to the City of Saratoga Springs is always worth it, whether you're coming to watch the horse races, see a concert, shop at boutiques, or, in this instance, explore a museum. Take a walk over to Congress Park in downtown Saratoga and become one of 13,000 people who have visited the Saratoga Springs History Museum.

Founded in 1883, this award-winning museum features exhibits on the city's storied past, covering topics about settlement, commerce, and community life, the building's original use as a casino, and more. They offer permanent and changing exhibitions across three floors, as well as public programs.

Travel Tip: Saratoga is home to several other cool museums, such as the National Museum of Racing & Hall of Fame, the Saratoga Automobile Museum, and more. While you're in the Spa City, consider stopping at a couple of museums for a fun day trip. 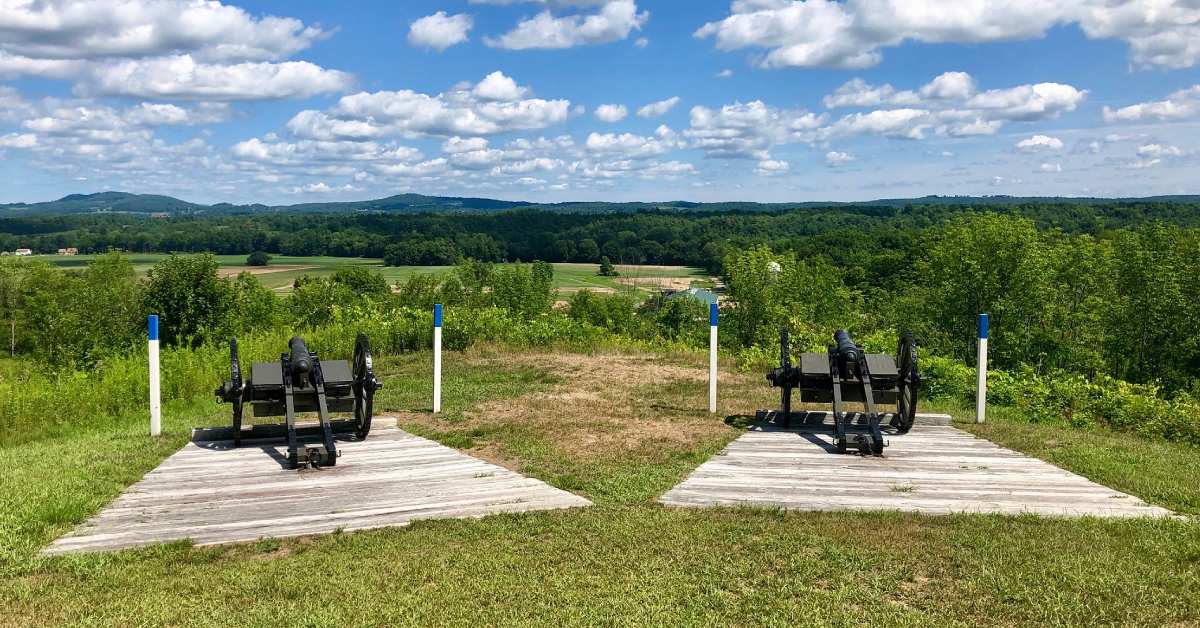 Located 55 minutes north of Albany, Saratoga National Historical Park in the Town of Stillwater comprises four distinct parts. The largest is Saratoga Battlefield, the site of the Battle of Saratoga, a major turning point in the American Revolution. While the park preserves the Battlefield, visitors are welcome to take a free self-guided tour of the property and learn about its role in the war. You can check out the Wilkinson Trail year round and hike along hallowed ground, or drive/bike/walk along the seasonal Battlefield Tour Road and stop at 10 interpretive displays during your trip.

The other parts of Saratoga National Historical Park include the Saratoga Monument, Victory Woods, and the Philip Schuyler Country Estate. Visit the Park's website for the latest info on what's currently open to the public. 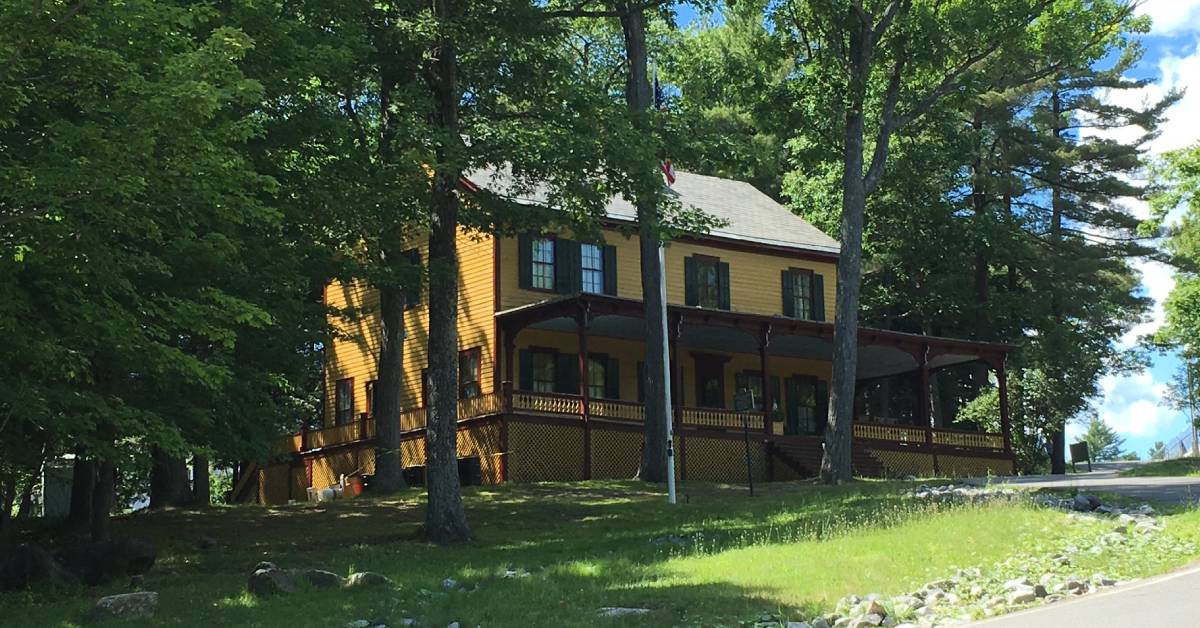 Near the end of his life, Ulysses S. Grant moved to a cottage in Wilton with his family in order to finish writing his memoirs. He passed away at the cottage four days after his final proofreading, and today, the property has been preserved and is essentially the same as during the Grant family's stay.

It is now open to the public thanks to the Friends of the Ulysses S. Grant Cottage, and visitors can view the original furnishings, decorations, and personal items that belonged to Grant. During normal operating hours, guests are welcome to walk the grounds and enjoy a free audio tour that provides info about Grant, his family, and the property's history. Grant Cottage is approximately 47 minutes from Albany.

Looking for even more history? Check out these other museums in the Albany area >>