Appearing for the first time at the 8th Bi-Annual Downtown Albany Restaurant Week is The Merry Monk, a new Belgian restaurant and pub that opened up on N Pearl and Sheridan in December and Wolf’s One-11 adjacent to the Times Union Center.

And back this Spring after a short hiatus, is Marche, the farm-to-fresh fine dining establishment housed in the boutique hotel, 74 State. In all there are 17 different restaurants to check out and enjoy.

New this year is Student Night on Monday, April 23, 2012. Students who show a valid ID will receive the Restaurant Week menu at La Serre and V & R Italian Ristorante for just $15. 12. But the offer is only good on the 23rd and at those two restaurants. 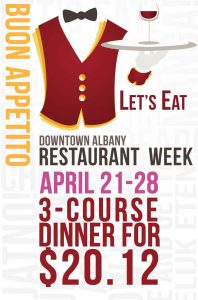 Coming to Restaurant Week? Make it Dinner and a Show – or some gallery and museum fun. Here’s a few things to check out:

Celebrate the savings. Enjoy the food. Eat and Be Merry. Check out the participating restaurants and their special menus online at www.downtownalbany.org