The Albany Devil’s current 2012/2013 season has been a special one. With increased overall attendance, season tickets numbers on the rise, and the largest crowd to date, the team has brought an incredible amount energy to the Times Union Center. We checked in with the Devils to get a firsthand account of how great the season has been. Who better to meet with than the team mascot? Lucky for us we bumped into the Albany Devil Dawg and chatted with the regions favorite pup about the excitement of this year’s season. 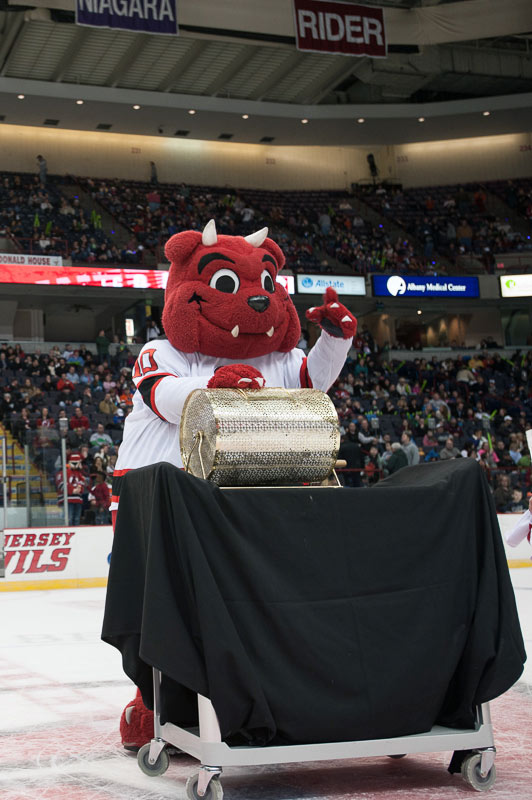 How many Albany Devils games have you been to?

I have been to every Albany Devils home game. That’s over 100 games and counting!

What got you into hockey in the first place?

Well, first of all, hockey is the coolest sport there is, so I was immediately drawn to it. I think I related to the game, since the players are always trying to put “the biscuit in the basket” and I love me some biscuits.

What do you think is the most exciting element of an Albany Devils hockey match?

The most exciting thing about going to Albany Devils games is that you get to see me.

In all seriousness, hockey is one of the most exciting sports out there. There is always action on the ice. Even when the game is stopped between periods, you get to see exciting fun on the ice in the form of youth hockey, broom ball, musical chairs, dress-like-a pro and other great intermission games. Oh, and how can I forget the always popular T-Shirt Toss. There is something for everyone.

What has been your favorite game this season? Why?

This is a tough one, because it is so hard because I enjoy them all so much. If I had to choose, I would say Saturday, January 26th. We had a record crowd of 10,218 people watching as we beat our arch-rivals the Adirondack Phantoms 5-2. With so many people there, the building was electric. Every time we scored everyone got so loud and so excited. The atmosphere was amazing, the game was amazing and the fans were amazing. This was definitely my favorite game of the year.

Do you ever play hockey with the team during practices?

I tried to play hockey with the team during practice, but my tail kept getting in the way. I kept tripping over it, and someone even stepped on it with their skates… OUCH! I decided then, that I had better leave the hockey playing to the professionals. As for me, I’m a pro at getting the crowd pumped up and making sure that they enjoy the games as much as I do. I love my job!

Haven’t made it out to a hockey game yet? There are 13 more games left this season. For more information on the Albany Devils and other Downtown events visit www.downtownalbany.org and check out our comprehensive Things to Do section. Don’t miss out on the action.

Need motivation? Email arosa@downtownalbany.org by March 4, 2013 at Noon for the chance to win a pair of tickets to the March 9th home game against the Springfield Falcons.