Did you know that perforated toilet paper was invented in Albany?

Chances are you did if you’ve played a local mobile trivia game.

Based at the downtown Albany Holiday Inn Express is shuttle driver Mike Andrews, who decided a few months into his new job that it was, well, boring.

“You just shuttle people from one place to another,” he says of most shuttle rides. “There’s not a lot of engaging. It’s ‘Where are you going?’ and ‘Are you scheduled to go there?’ and nothing after that. Absolutely nothing. It’s all silent or people are talking amongst themselves.”

As someone who loves to talk to people, the quiet atmosphere of simply driving people back and forth led him to a creative solution. Mike went to hotel general manager Dee Earle and proposed a way to get people to engage not only with him and the hotel, but also with Downtown.

With Dee’s approval, No Cash Cab was born. Inspired, as you might have guessed, by the show Cash Cab, Mike asks his passengers multiple choice questions about Albany. Instead of cash, passengers are given prizes that represent the Capital Region including things like Downtown Albany BID t-shirts, ValleyCats hats, and priority club membership points (for those who are members of the hotel’s group). The questions cover everything from Albany’s history and politics to celebrities and their connections to the area.

“It’s guest relations. When people come off the train or off a plane, I’m the first guy they see, so it’s up to me to get them primed up to stay at our hotel and to go to different restaurants and things like that in Downtown,” he says. Perhaps because of what they expect from shuttle services, most people don’t expect to be greeted by trivia and prizes, and that’s all part of the fun.

Mike works to get a minimum of eight questions in – the number a person needs to get right to win – during a ride, but has about 20 total for longer trips around the city. While people are at times hesitant to play because they don’t know much about Albany, he reassures passengers that the questions are multiple choice. Plus, he tries to order them in a way that as the questions go on, previous answers will help guide a more educated guess. For example, he asks what the main trade was back in Henry Hudson’s time (beaver pelts), then asks what the state animal is (beaver).

He’s also working to make the city’s history more tangible for visitors to the Downtown area. 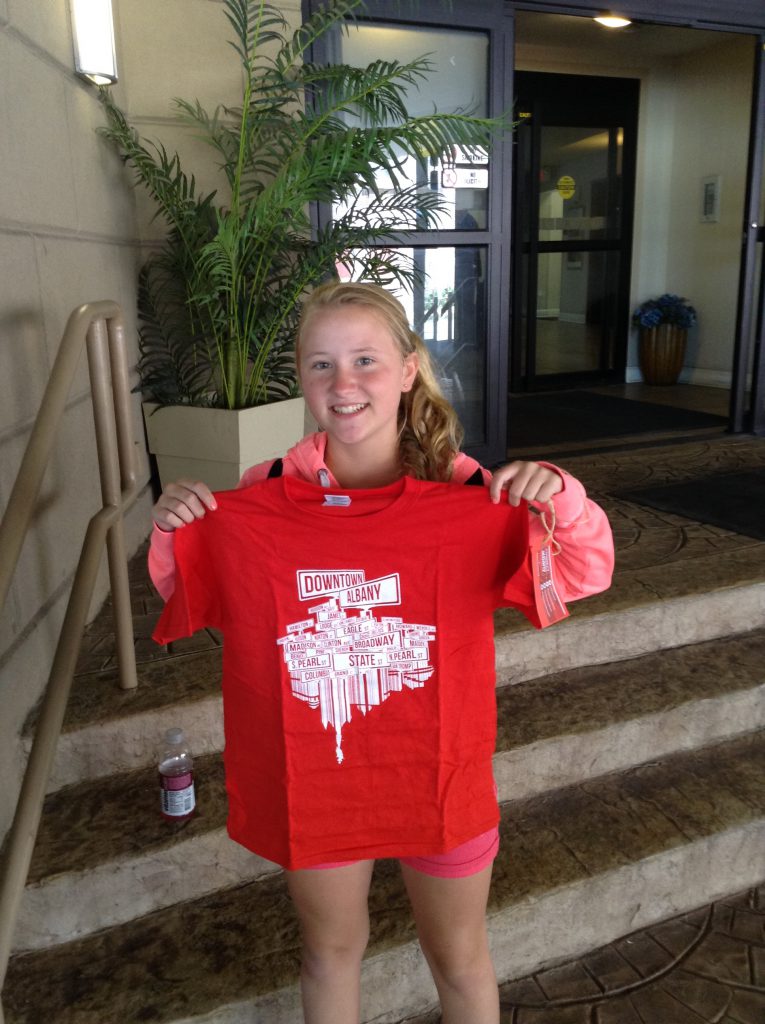 “The questions are specific to where I am. If I’m near the Capitol, they’re specific. I’ll start with the building. It took 30 years to complete. I try to be as close to the historical building or site as possible so people can actually see it,” the Albany native says.

No Cash Cab has been going on for three years now, and Mike’s already seeing people return to the hotel just to play.

“This one lady, she brings a group of people back every year and she says I won last year and I’m going to win again this year! That’s how crazed people get over this because it’s fun,” he says, beaming with excitement.

Sometimes though, it’s the people who least expect the game who need it the most.

Mike tells the story of a family who was in his shuttle once – parents, kids and grandparents together.

“I’m taking them out to dinner and I say ‘Hey everybody let’s play No Cash Cab!’ and everybody’s like ‘huh?’ I explained to them that it’s a trivia game that we play and you might win a prize,” he says. “I started going through the whole thing. The father, once we brought them back to the hotel, he says ‘You know you just made my family’s whole day. We came up here for a funeral and you just made our whole day.'”

That’s when it hit him, he says; at that point he knew he was doing something right.

For the future, Mike hopes to be able to outfit his shuttle with lights and other technology to make it feel like the TV show on which the game is based. As close as he’d like it to be to Cash Cab, there will always remain one important difference: No matter win or lose, hotel patrons will always be brought to their destination.