With USS Slater’s arrival slated for July 1, 2014 between 7:00 AM and 8:00 AM, we thought we’d share some of the story of the last Destroyer Escort afloat in America. According to a press release, the hope is to have the ship, located in downtown Albany at the intersection of Broadway and Quay Street, open to the public by July 4. Once open, the ship’s hours will be Wednesday through Sunday 10:00 AM to 4:00 PM. For updates, check their website or Facebook page. The information and photo below were provided by a USS Slater representative. 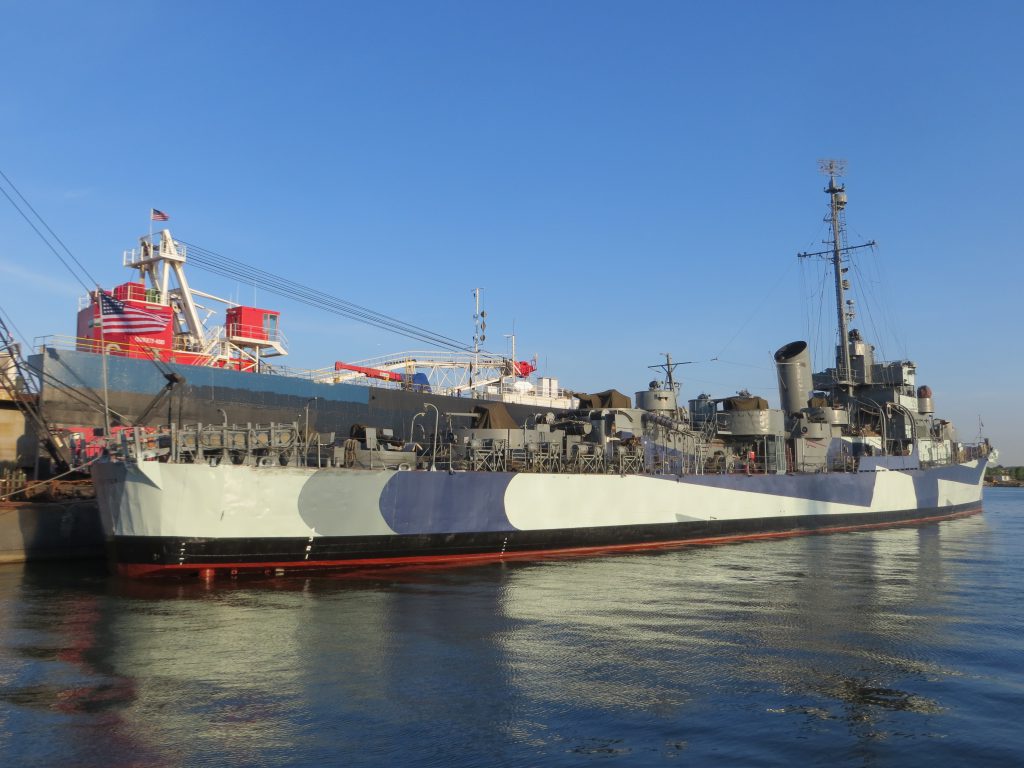 What is USS Slater’s history?
USS Slater, the last Destroyer Escort afloat in America, was launched in 1944. She served gallantly in both the Battle of the Atlantic and the Pacific Theater of Operations during World War II. In 1951, Slater was transferred to Greece under the Military Defense Assistance Program. Renamed AETOS (Eagle), she served as an Hellenic Navy training ship for forty years. In 1993, after deactivation, she was brought back to the United States by a group of former Destroyer Escort Sailors. Since 1998, she has been undergoing restoration while being open to the public in Albany. The ship is owned by the Destroyer Escort Historical Museum.

Why does the ship look so different now?
USS Slater’s paint scheme has been returned to her 1945 dazzle camouflage. Prior to World War II, the Naval Research Laboratory was working on reducing the visibility of ships at sea. This research continued to evolve during WWII and included two different routes; attempting to harmonize the ship with its surroundings or painting bold and harsh patterns to confuse the enemy. Slater’s paint scheme prior to the drydocking may not have seemed special but was, in fact, calculating in design. The ship was hued in a way that would allow her to blend into the ocean if seen from above, or visually meld with the horizon if seen from the sea. With Slater’s new paint scheme, the second tactic of WWII-era naval camouflage will now be on display.

What is dazzle camouflage?
Dazzle camouflage, refers to a purposely confusing paint scheme meant to distract the enemy. It’s difficult to hide a ship in the ocean, so researchers and Naval officers ran in the opposite direction by introducing a combination of bright colors, sharp zigzagging lines, and jagged geometric shapes. From afar, it becomes difficult to determine the size, direction, and speed of the ship due to the drastically clashing silhouettes painted on both the hull and superstructure. The enemy was tasked with aiming a torpedo at a ship’s anticipated location, which took longer to determine based on the introduction of dazzle. While Slater is not hiding from the enemy, we’re excited to for the opportunity to convey a “new to us” aspect of naval tactics.

Who gets to ride the ship back to Albany?
In addition to a working crew of volunteers, Destroyer Escort Sailors from World War II, Korea, and Viet Nam are expected to be on board for the 24-hour journey. Regardless of the ship that they served in, USS Slater has become every DE Sailor’s ship. For the time they are aboard, Slater is “their ship.” A unique opportunity awaits.

When will Slater return to Albany?
USS Slater is expected to depart Caddell’s in Staten Island at 0500 hours Monday, June 30th. The ship should be passing West Point at 1300 hours and the Walkway Over the Hudson at 1600 hours. These estimates are subject to many variables including, but not limited to, actual time of departure, actual maintained speed, and marine traffic. Please keep in mind that, where travel on the Hudson is concerned, nothing is ever definite. The ship should arrive in Albany sometime between 0700 and 0800 hours Tuesday, July 1st.

What happens on the voyage?
USS Slater will pass numerous historic sites as she journeys up the Hudson River to Albany, including the Statue of Liberty, Ellis Island, USS Intrepid, West Point, and Hyde Park. A tentative gun salute is planned for West Point, with a return salute from a Cadet Squad. Honors will be rendered at Hyde Park, home of FDR, one the originators of the concept of a Destroyer Escort. FDR’s son, Franklin, commanded the Destroyer Escort USS Ulvert M. Moore during WWII. With little fanfare, USS Slater drew crowds along the banks of the Hudson as she headed south. For her return, it is expected that many more well-wishers will journey to the river’s edge to view history as Slater sails past. The best places to view Slater are public parks and recreation areas along the Hudson River.

How can the public support USS Slater?
Donations to the Museum are tax-deductible to the extent allowed by law. Donations may be mailed to DEHM, PO Box 1926, Albany, NY 12201. Visit the website at www.ussslater.org and click on participate to make donations online.