People from as far away as the Netherlands have been drawn to downtown Albany since last month to do something they can’t normally do on the streets: Play pianos. As the Downtown Albany Business Improvement District’s “Play Me, I’m Yours” exhibit, which includes 13 playable pianos around Downtown ends later this month, a local filmmaker saw the opportunity to help garner both attention and participation.

With a decades-long connection to pianos, Albany filmmaker Mike Camoin set out to make a film that would encourage more engagement with the exhibit before it ends on July 27, 2014. After asking BID executive director Georgette Steffens how he could help spread the word, the decision was made to create a short film. 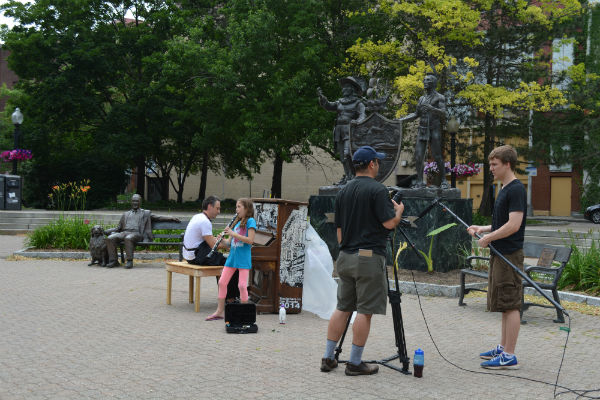 “The production of a film based around the 2014 Sculpture in the Streets exhibit is yet another example of the range of piano interactions we are seeing,” Steffens says. “While everyone is invited to play, there are a number of other ways to engage with the pianos as well. Runners have made their locations into a course; cyclists have taken breaks during rides to play; bands have taken pictures at pianos to promote upcoming shows; visitors have posed for pictures next to it, or taken pictures of their children or dogs. People from the Capital Region and beyond are proving every day that while the installation will only be in Downtown for a few more weeks, memories of having visited it will extend to the distant future.”

With the help of close friend Greg Aidala, who has been voted Best Local Comedian five times, Camoin’s daughter Isabelle, who has studied multiple instruments and drama at the New York Theatre Institute in Troy, NY, and two summer college interns, “Waiting for My Uncle Maestro” was born. The two and a half minute film utilizes the team’s unique brand of humor and talent, designed to promote awareness of the pianos.

For Camoin, who owns the company Videos for Change, the piano has always been a place where family and friends gather. Upon discovering the “Play Me, I’m Yours” program in Albany, he immediately saw the value and potential of having access to such an instrument on the streets of downtown.

“With connections to the Albany area, pianos, and having worked previously with the Downtown Albany BID, it was a natural fit to create a film that encouraged people to engage with such a unique exhibit that has such a short lifespan in the Capital City,” Camoin says.

Currently the only US city hosting the international touring artwork, the downtown Albany pianos have presented a unique opportunity to encourage residents, employees and visitors alike to find their inner musician. Since June 13, 2014, people have uploaded close to 200 videos and photos of the pianos to pianosalbanyny.com, with countless more being shared on social media. Anyone who visits the installation is encouraged to join the community conversation by continuing to post to that site.