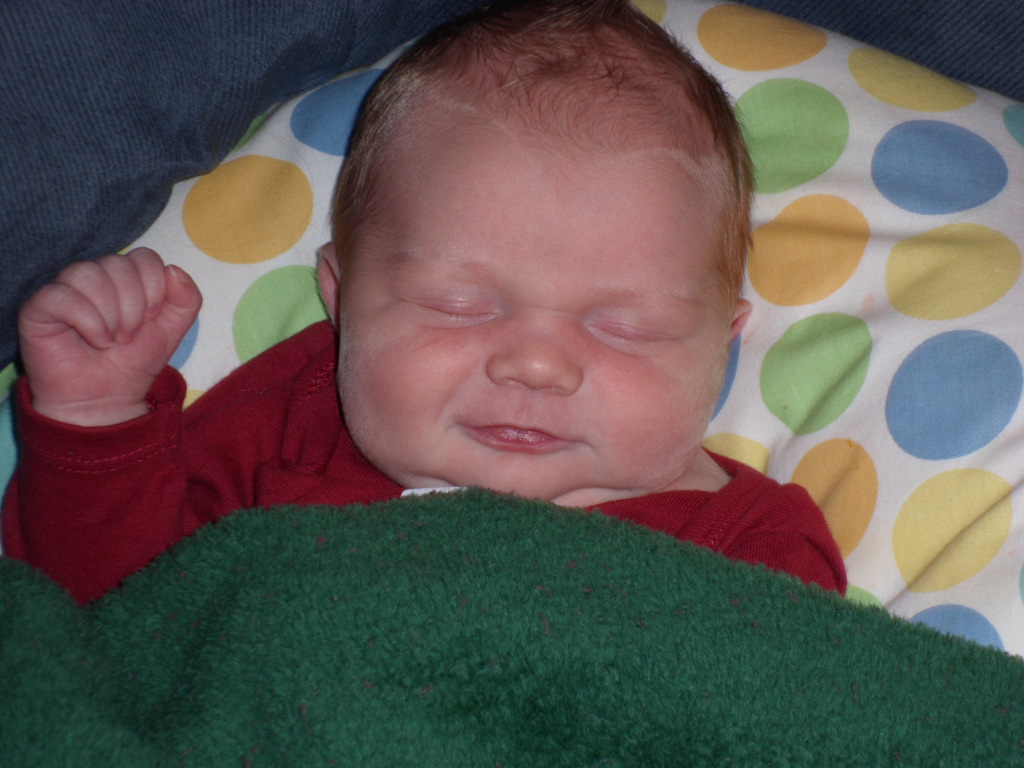 My “baby” turns 2 years old today. I know I’m supposed to say “I can’t believe my baby is already 2!”, and there is a part of me that relates to that, but truthfully I cannot believe that only two years and one day ago I had never held Corbin in my arms. I had never seen his face, changed his diaper, dressed him, watched him smile, heard his cry, felt his warm cheeks, or held his tiny hand. That is what I absolutely cannot believe – a world without Corbin – I can barely remember such a thing.

December 20, 2011 at 4:38 a.m., Corbin Gabriel von Hassel entered the world in much the same way that he lives his life…fast and furiously with barely any warning. We made it to the hospital with only minutes to spare! I arrived in the birthing room at 4:31 and was peacefully holding my baby 7 minutes later.
I’ll skip the gritty details but here’s basically what happened. At 1:00 a.m. (only 1 hour past my due date), my son Landon, then 22 months, woke me up and was unusually clingy and wanted to be rocked back to sleep. I sat in the glider with him, feeling unbearable discomfort (as I had for many nights before). Honestly, the closer I had gotten to my due date the less I had anticipated labor pains. I had felt so disappointed with false labor that I was not to be toyed with again. This time I would have to have my water break or have immobilizing labor pains before I would assume it was “the night”. Besides, I had been in labor for 22 excruciating hours with my first son, so I was sure that I had plenty of time.
Unable to get Landon back to sleep, it crossed my mind to wake up my husband but knowing I wouldn’t be able to sleep hearing Landon cry out for me, I turned on Nick-at-Night and gave up trying. By 3am, a normal person might have assumed that they were in labor but I still wasn’t sure. I kept feeling very uncomfortable every few minutes and thinking I had to go to the bathroom, but luckily it would fade and I could relax again. Hmm, wonder what that was? Umm could it be a CONTRACTION?! Over the week prior I had experienced false labor but when I would take a bath it would go away, so I decided I should take a bath to find out if it was the real deal or not.

Great idea! I can be a real genius sometimes. Landon stood beside the tub playing with the water and I decided that I was, indeed, in labor. I stood up to get the husband, OOOPS…there was that immobilizing pain I was waiting for. This happened about 3 times before I realized that I could not get out of the tub. I looked at Landon, and I knew he sensed the urgency. Like when Lassie goes to get help because Timmy is stuck in the well. So I told Landon “Go get Daddy.” Landon looked at me and, seeing my distress, he turned to leave. I breathed a sigh of relief as Landon turned back and hurled a bottle of shampoo at my head and laughed. No Lassie here! He totally thought we were having the coolest poolside party ever. I began yelling for my husband who, despite his tendency to panic over the tiny things, is remarkably calm at such times and seems to find the humor in emergency situations well before anyone else. So, like clockwork, he made the phone calls, got Landon ready, and even cracked a couple of untimely jokes to lighten the mood.

Skipping ahead…we were in the car, and Landon was with us because we no longer had time for my Aunt Laura to meet us at the house, so she was on her way to meet us at the hospital. I was in full-blown, “Jesus take this cup from me–this kid better be cute–why did I do this again–never mind I only want one child–make it stop–I’m gonna die,” labor. Not wanting to terrify my one-year-old in the back seat, we blasted the Laurie Berkner CD as I “sang along” in earth-shattering screams. Looking at the car clock, I realized I was having a contraction every minute: 4:16, 4:17, 4:18, 4:19, 4:20, 4:21… We made it to Bellevue Woman’s Hospital – a 15-minute drive from our home. Matt stayed behind to transfer Landon, who was somehow sleeping through all of this, into Aunt Laura’s car as a lady wheeled me in to delivery.

I was well past trying to hold it together, and I can assure you that I am remembered in that hospital. Wildlife fled, clouds rolled back in the sky, the ground shook, and the waters crashed, as I made my way to the delivery room. A nice nurse handed me a robe and said “Here honey, put this on” as she pointed me toward the bathroom. I remember being in the bathroom and thinking, “This is it – my final hour! Someone will come in here, find me on the floor with a baby beside me, and put the pieces together.” Later I would find out that Matt was able to find our room by following the unwavering screams of his darling wife.

Next, I was in the delivery bed and I heard two young nurses demanding that I stop pushing. “I’M NOT!” I screamed. At that moment, I decided this was no place for me to be, that they could deliver this baby without me, and I decided to climb away. I’m not sure how I expected that to work out, but I do remember just gripping the side of the bed and trying to escape the entire ordeal. I was told that by this point it was around 4:35 a.m. and the midwife, as well as my Husband, had entered the room. I will skip the gory details of the next 3 minutes and fast forward to me holding my perfect, chubby little Christmas angel…my Corbin Gabriel. It really was not worth it, but I do love him. HA! Kidding, I would do it every morning if I had to, just to be his Mom <3

I think of Corbin as my Christmas gift from God. No, he was not an immaculate conception – in fact he was a “one too many beers, holy crap what did we do?!” conception – but when I held him that winter morning every question and concern I have ever had ceased to exist and for one of the very few times in my life I only felt one emotion: Love, so completely and so consuming that my heart could honestly not hold it and it poured out into all the world.

That first day we couldn’t decide if he should be named Corbin or Gabriel and using a quarter in my husband’s pocket, which is now named “the coin of destiny”, we made our choice. Tales it is!…Corbin Gabriel.

That is the story of how I met Corbin, and the next two years would be spent similarly, with unbearable moments of pure frustration, followed by sheer joy and abounding love.

He is determined, purposeful, engaging, and incorrigible. Getting to know him has been one of the greatest joys of my life. Terrific/Terrible Two’s here we come!!! 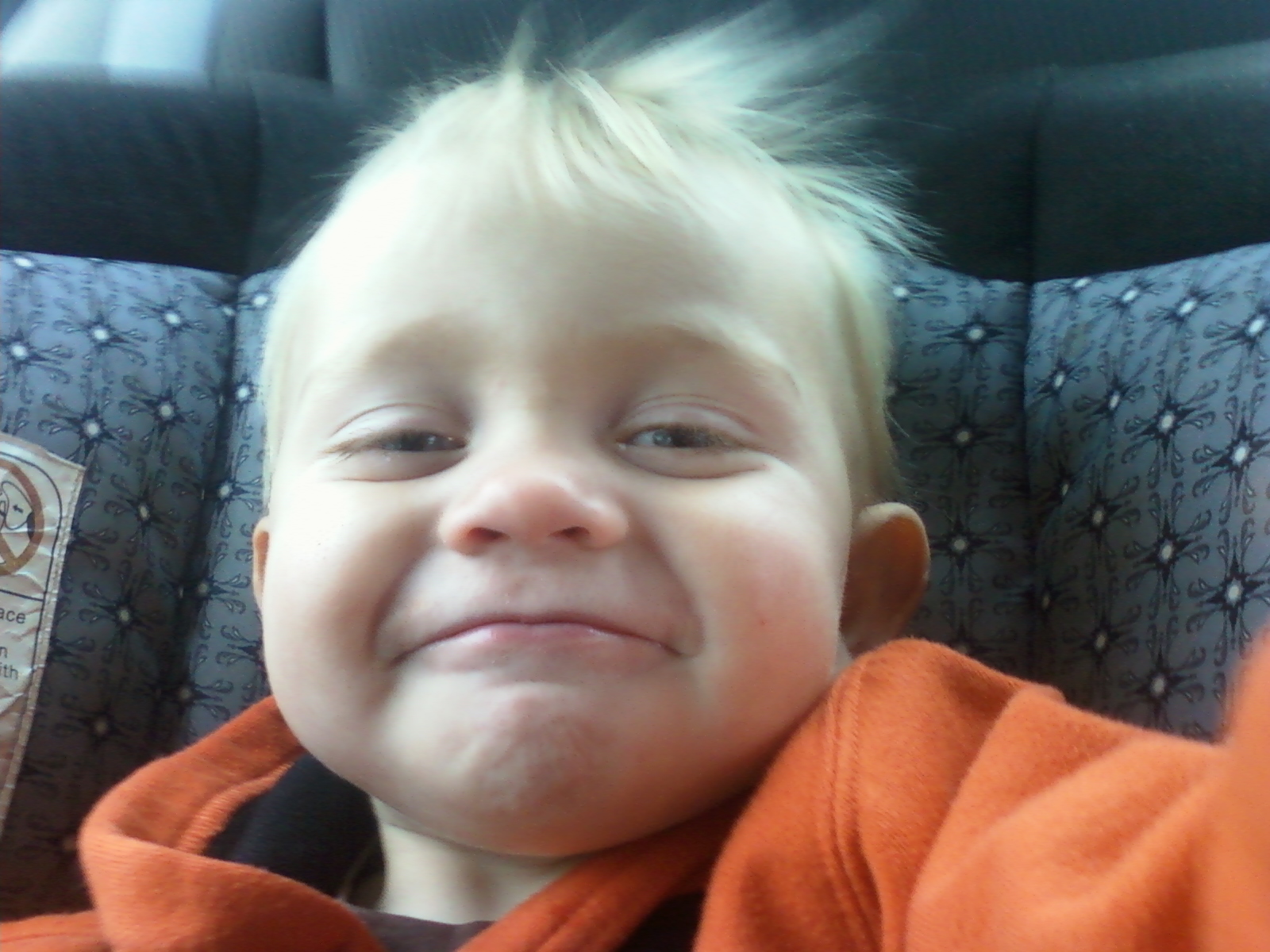