Last night I had a dream that my four-year-old, Landon, had his little backpack on and was about to get onto a bus to go to his first day of preschool. In my dream, he gave me a kiss and said, “I like school!” with that big and winning smile that has been stealing my heart since he was a newborn. Then he turned around, walked onto the bus and sat down. I watched his little face in the window and saw him make his “courage” face, which he does when he’s trying to be tougher than he is. Suddenly as the bus pulled away I saw his hands reach out to me with terror-stricken eyes as he sobbed and drove out of sight.

In case it’s not blatantly obvious, I just finished filling out the paperwork for my “baby” to start preschool this Fall.

When Landon was first born, I had read and researched all of the parenting strategies and had the perfect parenting plan in place. I suppose in the absence of his physical presence I had forgotten that he might weigh-in on some of the decisions that we had made, but his first objection was the bassinet. I was against co-sleeping because, despite the many positives, I was terrified that I would roll over on my baby, and so I would put up with any amount of sleeplessness to ensure that didn’t happen. When the bassinet was a failure, I tried the swing at night. When that didn’t work, I tried rocking him to sleep in his carseat and then putting the car seat in the middle of the bed and sleeping with my hand still on his chest. I even tried the cry-it-out (CIO) method one particularly exhausting night and learned that he and I did not have the temperaments to sustain that method. I spent many nights holding him in my glider, watching nick-at-nite and trying to to figure out how I could get my child to sleep without harshly chewing on my own words, but alas it was not to be. I brought him into my bed and for the next three years I got to hear my son softly breathing and see his perfect face as he slept securely next to me. 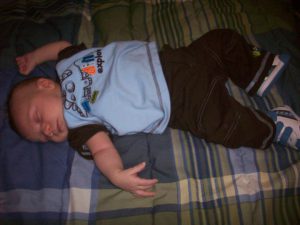 It’s not for everyone, and it was both an immense sacrifice and beautiful gift, but having breastfed on demand for the first year of his life it offered more sleep which, in return, made for better days. For the most part, I unintentionally practiced attachment parenting with my son, despite the fact that I had previously thought “those hippies need to get over themselves.” For whatever reason, that was just the way Landon and I clicked. It almost seemed like he was born too early and still needed to be snuggled up tight in the complete protection of his Momma. Despite him being a late bloomer to the big world around him, he struck out of the gate with aggression. He was a bully before he could walk, and he found a way to scoot himself around merely for the pleasure of hitting other kids. Still, he was a Momma’s boy, and while he seemed completely unphased by correction, over time he started to see that the world was not his batting cage and as he entered his third year, an empathetic, loving and hilarious little boy arose.

Still, possibly due to my parenting style and largely his personality, he has always stuck close and preferred to be in my presence. Being a stay-at-home Mom made this possible and while we have used close family to babysit from time to time, it’s rare.

Over the years, he has shown many signs of separation anxiety, but in the past few months he began to ease out of my open arms and find his way. Still a hugger and a snuggler, but he has begun asking to get dropped off at a friends’ houses, and mostly separated with excitement and ease. He even jumped into T-ball without looking over his shoulder for me, and now he happily talks about going to school by himself.

It is clear to me that he is ready and so, in just a few short months, I will be bringing my little guy to preschool. Some nights as he falls asleep, I think about how secure he is becoming in his world and open to new experiences, and I think of how many times I worried that I had “babied” him too much, or not pushed him hard enough, and feared I had somehow ruined him. It is a relief to know that he has found his comfort away from me but, at the same time, I miss the simplicity of his world when I was the only thing in it. 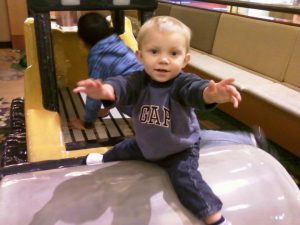 I think about dropping him off, and I try to think of a rational and not “I’m a CRAZY mom” way of saying all the things I want to say. I worry that he still pronounces some words incorrectly and maybe the teacher won’t understand him. I think of how he has the endearing habit of needing to be completely naked to go to the bathroom, and how he has a hard time getting his shirt back on. I picture him standing in the bathroom too shy to ask for help and quietly crying for me. I think of someone taking a toy from him and him taking it back just as the teacher turns around to correct him, and he tries to explain himself but isn’t being heard. I think of him being hungry but it’s not snack time. I think of him having an accident in his pants and how embarrassed he would be. I think about him learning how to tie his shoes and me not being there to see it. I think about how he will make new friends that I don’t know and how he will learn new and amazing things, and I will miss the light in his eyes when he gets truly fascinated by something. 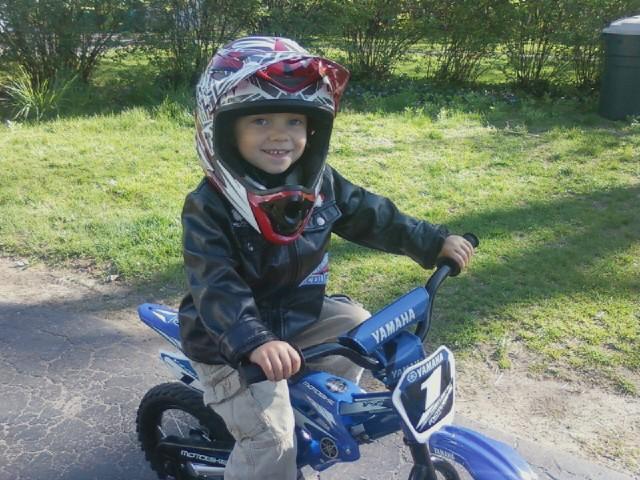 I am excited for him to learn and grow, and it tickles me to think of him telling me tales of his day, but for all of his life I have been there as a life translator. I have begun to sit back and watch him take in the world on his own, as he orders his own food, make new friends at the playground, return his library books on his own, and even buys his own stuff at the store. I’m very proud of him, and I know this next chapter will be a beautiful one but there is no easy way to let go when there is nothing sweeter in this world than holding our children in the complete safety of our always loving arms.