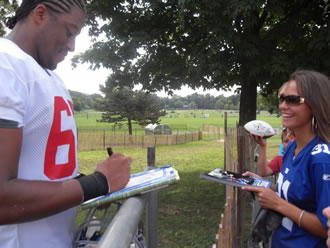 ALBANY NY - For the past 16 years (excluding 2011), the New York Giants have held their training camp here in the Capital City at the University At Albany (UAlbany)! They held training camp at Timex Performance Center last summer (2011), as a result of the NFL lockout.

The team is close to reaching an agreement with the school that will keep the Giants training in the Capital Region through 2012, so it looks like you might be able to enjoy hosting your favorite team again this year!

Every summer, the NFL team draws tens of thousands of fans to watch their preseason practices and get a glimpse at the stars in uniform at the UAlbany college campus. The Giants have held their trianing camp here in Albany since 1996 -- the longest consecutive camp location in the team's 85-year history.

If you are hoping to get a glimpse of the Giants this summer (and maybe a few autographs from the stars), take a peek at the Giants' training camp schedule for July 26 - August 15, 2012.