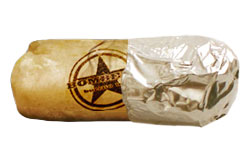 This spring, the popular Bombers Burrito Bar has opened a second location in Schenectady, serving up their signature giant-sized burritos, wings, cocktails and other menu items in the Electric City.

Bombers' new facility opened May 5, 2009 (Cinco de Mayo) at 451 State Street in downtown Schenectady. This three-story building is located across the street from Proctors Theater and is nearly twice the size of the original Bombers Burrito Bar in Albany.

The first floor will be takeout and a seat-yourself dining room with a full-scale bar and seating area serviced by a waitstaff on the second floor, similar to the current layout of their Albany location on Lark Street. The major differences include more seating, a mechanical bull and a third-floor private party bar called La Playa.

Interested in eating late in Schenectady? Bombers in Schenectady will be open longer than their Albany location, from 11am - 2pm every day of the week, serving food and beverages.

For more information, pictures and updates on the Schenectady Bombers, visit the Bombers Burrito Blog.