Home / Things to Do / Catch a Game

Great Places to Catch a Game in Albany NY

Are you a sports fan? Albany has some of the best stadiums and indoor arenas where you can watch local and national sports teams. Whether it's football, basketball, ice hockey or baseball, if you're in the Albany area, check out these six local hotspots where you can root for your favorite team! 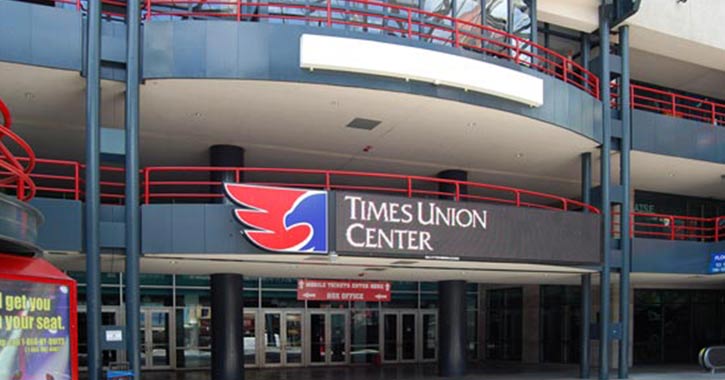 Ice hockey, basketball, arena football, tennis, or wrestling - you name it, the Times Union Center in downtown Albany is the place for sports fanatics to watch a variety of games and tournaments. Currently home to the Albany Empire arena football team and Siena College's men's basketball team, this massive indoor arena with a seating capacity of 15,500 is used for local college and high school sporting events, and also hosts exhibition games for the NBA, WNBA, and NHL.

Located on the Hudson Valley Community College campus in Troy, the Joseph L. Bruno Stadium is the home field of the Tri-City ValleyCats, a minor league baseball team. The ValleyCats play 38 home games at the 4,500 seat stadium from June through September. And as an added bonus: all of the seats in the stadium are extra wide with seat backs for maximum comfort.

Looking to watch some college basketball? The SEFCU Arena located on SUNY Albany's campus is home to UAlbany's men's and women's basketball teams, the Great Danes. The official athletic site for the University at Albany, this 5,000 seat arena hosts other college sports throughout the year, too.

Named in honor of Bob Ford, who coached UAlbany football from its inception until 2013, the Bob Ford Field is a $19 million 8,500-seat multi-sport complex on SUNY Albany's campus and home to the Great Danes' NCAA Division I football and soccer teams. This professional-level stadium boasts a FieldTurf surface, Musco stadium lighting, and a $1.1 million Daktronics scoreboard with a 39' by 22' high-definition video display.

Spanning ten acres of sports fields, you'd never believe this stadium was once a reservoir for the Albany public water system. One of the oldest stadiums in New York, Bleecker Stadium was built in 1934 as part of a Federal public works project and recently added to the National Register of Historic Places in 2018. Today, it hosts area high schools, colleges, and youth and adult leagues including the Capital District Pop Warner Super Bowls.